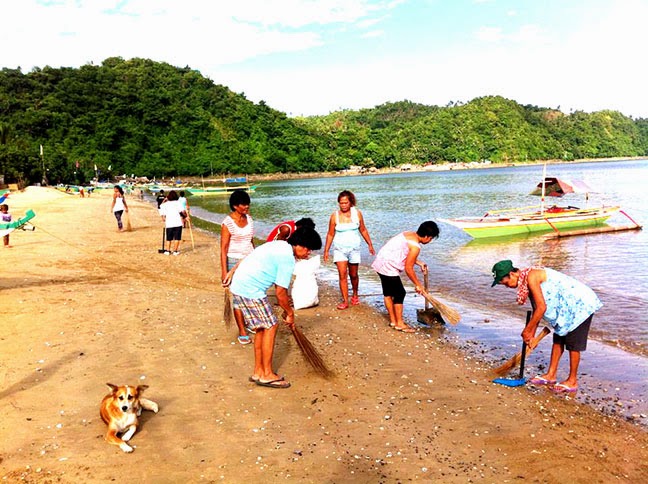 Rubbish attack … Residents of Baranggay Parang, in Mambulao, CamNorte, have joined forces to spruce up the shoreline. This has been a regular activity since the beach made its debut as a beach fit for strolling and bathing as well. The locals, specially the shoreline residents, are now part of the clean-up brigade recently formed by Baranggay chairman Willie Relao. The resurrection of Parang Beach was big news for all Mambulaoans, especially the OFWs, who are now eager to see the beach of their childhood. The development of the beach into another tourist destination is one of the tourism programs being pursued by the local government under the supervision of Councilor Artem Andaya, who was named Mambulao’s “tourism tzar” by Mayor Ricarte “Dong” Padilla. – Photo courtesy of WILLIE RELAO/Facebook

Posted by ALFREDO P HERNANDEZ, at 20:05 No comments:

After Glenda, frenzy at the beach 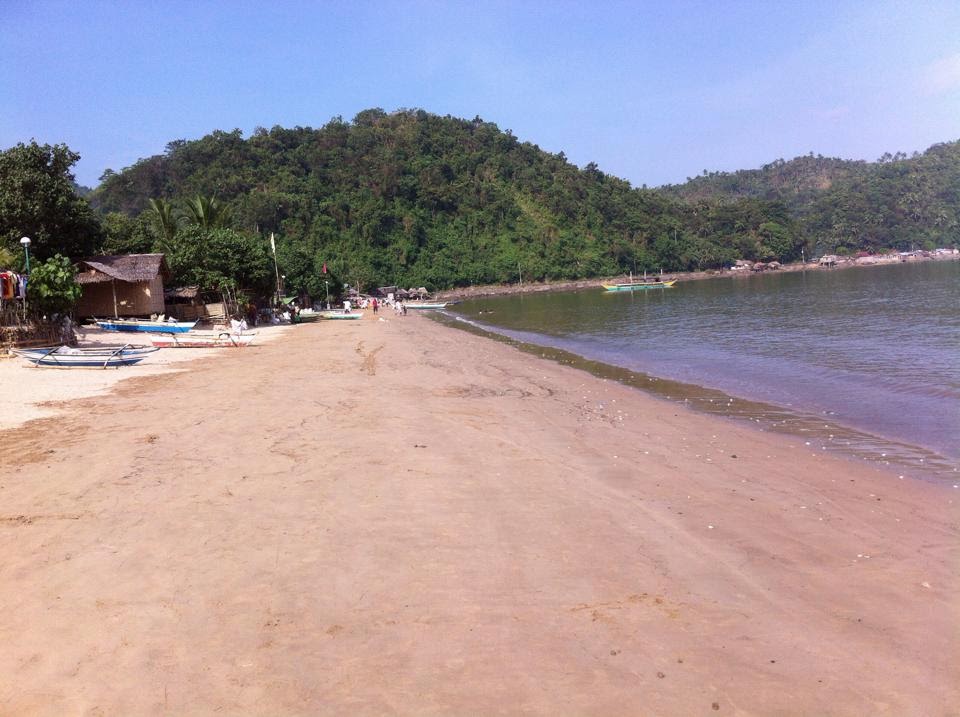 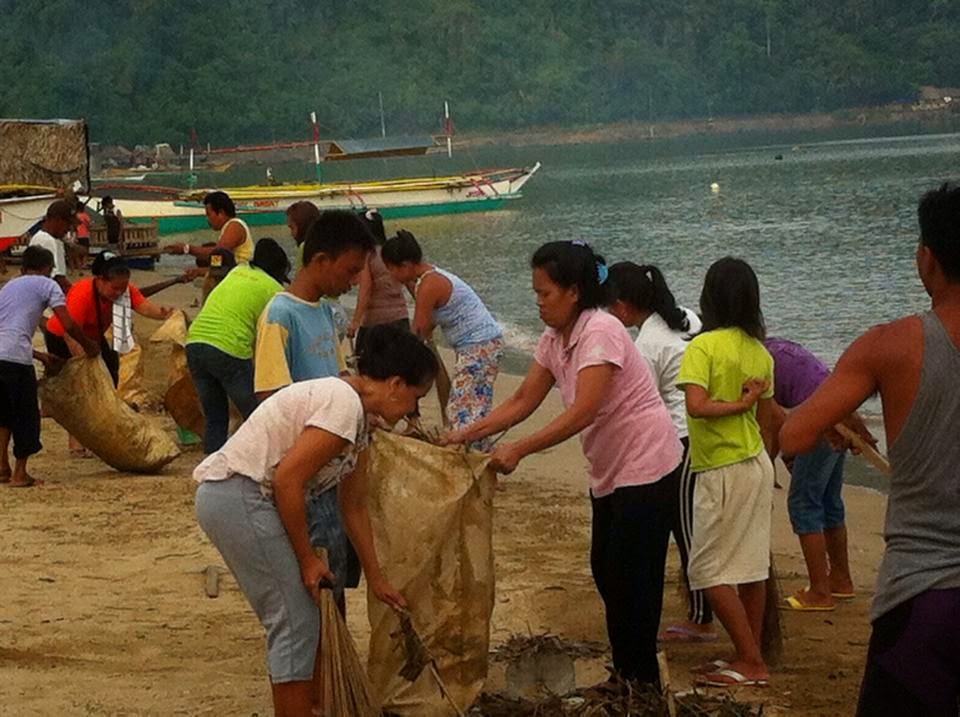 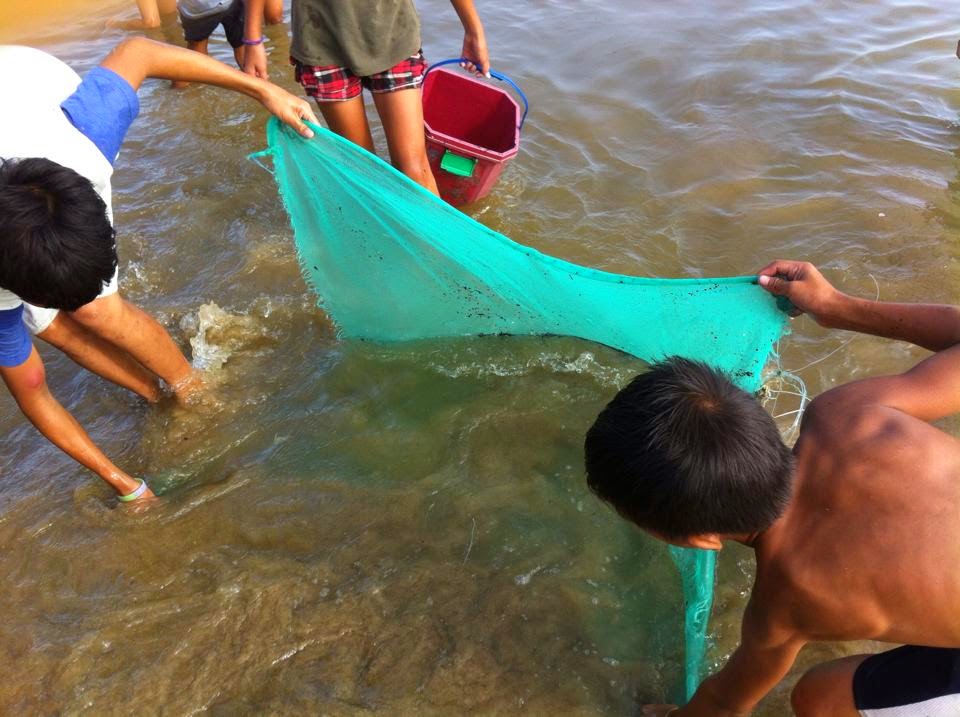 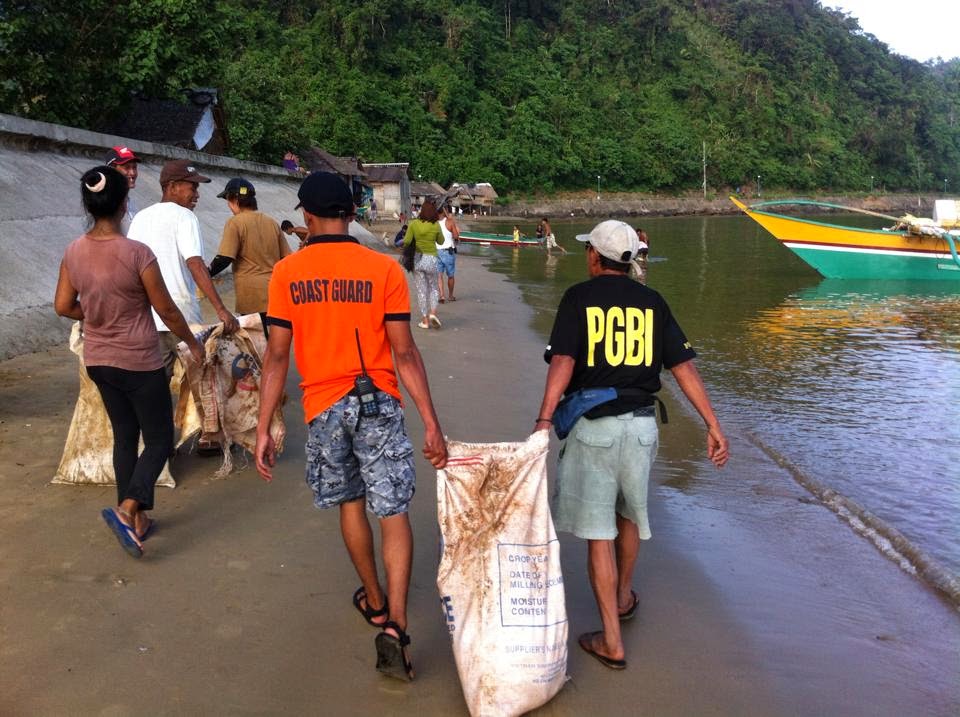 To the rescue … The 27 baranggays in Mambulao, CamNorte came out in full force on Saturday to clean the beach in Parang marred by rubbish brought in by recent Typhoon Glenda. The cleanup, which has become a daily affair at the beach to keep it clean, was spearheaded by Parang baranggay council headed by chairman Willie G Relao under the supervision of the municipal government’s Parang Beach Cleanup Czar Artem Andaya. The Philippine Guardians of Bicol, Inc (PGBI), a brotherhood of men from Parang, led the initiative. Housewives and children joined the frenzy, which lasted for a day. Pictures show the rubbish beach attack frenzy. – Text by AP HERNANDEZ/photo courtesy of WILLIE G RELAO/Facebook

Posted by ALFREDO P HERNANDEZ, at 20:04 No comments:

JPPHSC gears up for Level 1 category 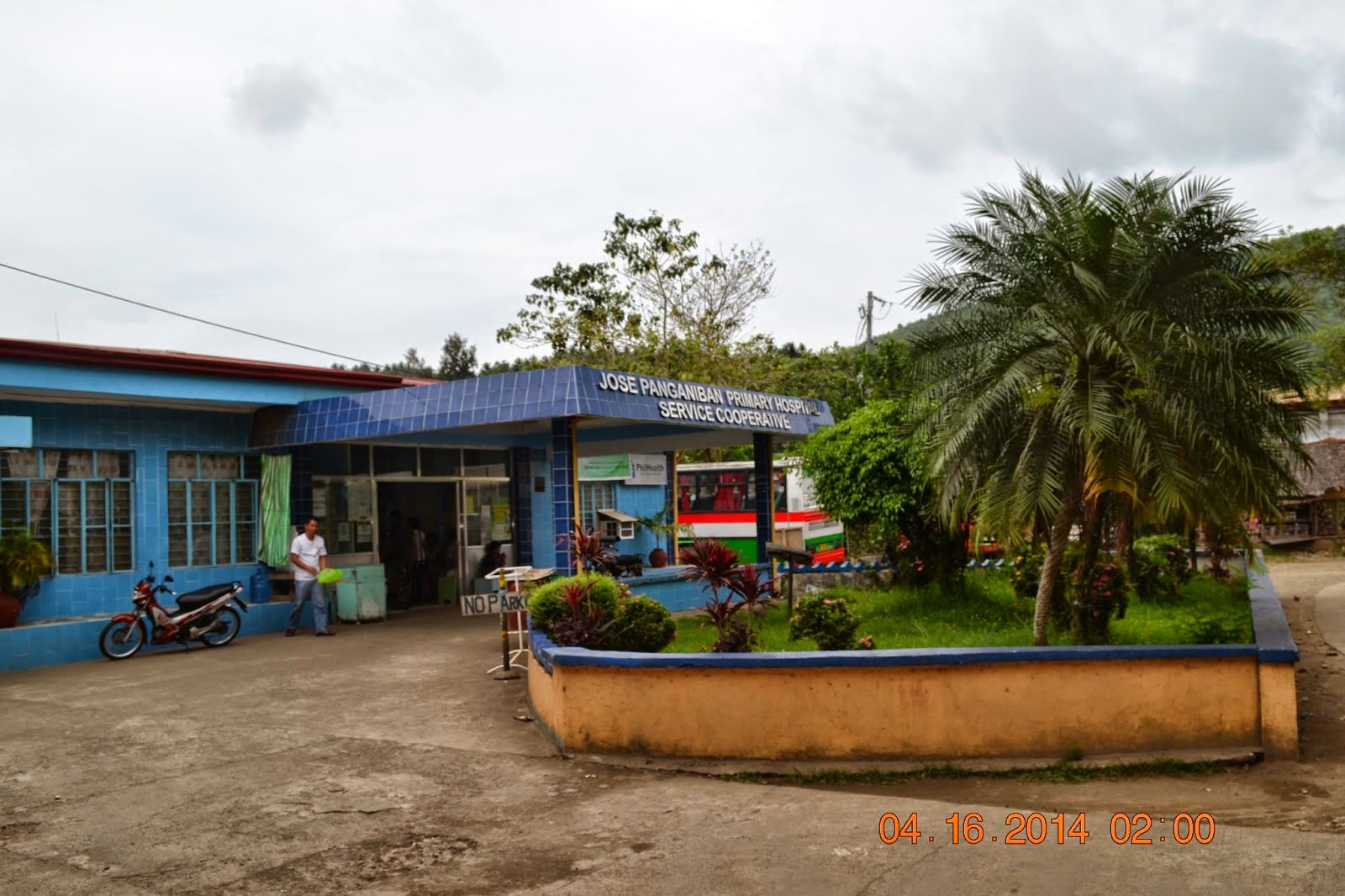 The primary hospital ... upgrade to Level 1 category in order.

THE Jose Panganiban Primary Hospital Services Cooperative (JPPHSC) is gearing up to boost its internal strength and meet the challenges of a Level 1 category hospital the cooperative expects to achieve next year.

The co-op said during the last general meeting in March that it has programmed a number of initiatives that would boost its strength as a cooperative health service
.
JPPHSC said it is now in the process of building the second floor of the hospital at a cost of Php1.5 million to earn the Level 1 grade and operate various medical services.

Priscilla G Mariano, chairman of the board, said during the general assembly meeting early this year that JPPHSC should be able to upgrade to Level 1 by 2015 to be able to expand services as called for under new rules set by the Department of Health (DOH), which categorizes health care services in the country.

At present, the JPPHS falls under the category of “other health facilities”, and not a full hospital.

Mariano said as a Level 1 hospital, which JPPHS hopes to achieve in 2015, it can do consultation, be specialist in medicine, pediatrics, OB-Gyne, surgery, emergency and out-patient services.

Mariano said should JPPHSC fail to hit this target, the co-op would remain just an ordinary primary hospital facility and lose at least 30% of benefits from PhilHealth according to the number of patients it had served.

She said the JPPHSC can not afford to remain just a primary health care facility amid the growing number of people in Mambulao needing improved services.

To boost its capacity, the co-op will work to increase its membership by at least 20% this year, or 73 new members, through recruitment from the baranggays, recruitment of patients and those who had patronized its services.

At the end of last year, the co-op had 627 members and 40 regular staff headed by the medical director.

The co-op said it would give incentives to staff, officers and members for every recruit they bring in.

As part of its capacity building, JPPHSC will hold two post-membership education seminars and one ownership training session during the year involving the members of the education committee and the board of directors.

The co-op will also hold monthly meetings during the year, and quarterly meeting for the staff and other committees.

To upgrade the skills of its staff and officers, an in-house training will be held year-round.

Concerned staff will be sent to relevant trainings sponsored by private groups and government health agencies.

The co-op has lined up yearly upgrades in the salaries, wages and incentives of its staff and honorarium of the board members and officers.

Mariano said that such would depend on the availability of funds.

This year, the co-op expects to hire another female doctor specializing the pediatrics.

Last May, JPPHSC achieved its targeted capital build-up (CBU) of to Php15 million from the Php10 million it had at the end of last year.

Besides the planned second floor facilities, the co-op has raised at least Php5 million to upgraded its physical plan under Administrative Order 2012 of the Department of Health.

The co-op recently reported the acquisition of X-ray and other facilities as part of its expanded services.

With all this, the co-op expects improved services to the client-patients of the health facility.

Posted by ALFREDO P HERNANDEZ, at 20:04 No comments:

The spiced up logo of MWBuzz.

STARTING in this edition Year 2 No 27, your news tunnel MWBuzz will be sporting a new logo, which depicts our town’s most popular landscape – the troika of cell phone towers atop the mountain overlooking the poblacion and the Mambulao Bay.
Just like the nostalgic silhouette of the chimney tower of the defunct smelting plant on Calabayungan Island, these twin towers and one will soon become new icons that would easily tell anybody looking at them in pictures that they are looking at the town of Mambulao.
Two of these transmission facilities are operated by Globe and the third is run by Smart.
The new banner logo’s cell phone towers reflect the townspeople’s bushfire passion for new technology embedded in the gadgets or devices they carry in their pockets, purses and handbags.
The three towers also symbolize the ongoing developments and progress that the community has been enjoying these past two years, courtesy of the revved up administration under Mayor Ricarte “Dong” Padilla.
The emergence of fast mode of spreading news and exchanging ideas is what these towers are here for and they would be heralding our community’s newfound source of pride from here on.
And for our part, we at the MWBuzz would always be enthusiastic to report on this.
Our new logo was designed by a computer graphic artist from Fiji who is based in Port Moresby, Papua New Guinea.
He earlier produced the logo of The Alumni Waves, which is now trumpeting the editions of this online bulletin board that caters to Mambulaoans in the Philippines and overseas.
Feel free to enjoy our stories in this edition.

View of the three cell phone towers atop the mountain overlooking the poblacion and the bay. – MWBuzzpic by AP HERNANDEZ

Posted by ALFREDO P HERNANDEZ, at 02:22 No comments: 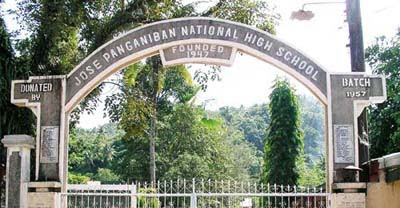 Portal to Knowledge and Wisdom 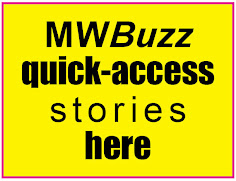 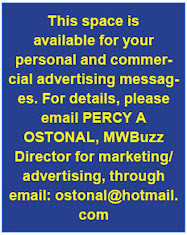 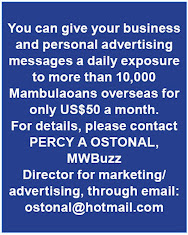